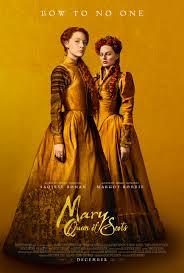 Synopsis from Rotten Tomatoes: “Mary Queen of Scots” explores the turbulent life of the charismatic Mary Stuart (Ronan). Queen of France at 16 and widowed at 18, Mary defies pressure to remarry. Instead, she returns to her native Scotland to reclaim her rightful throne. But Scotland and England fall under the rule of the compelling Elizabeth I (Robbie). Each young Queen beholds her “sister” in fear and fascination. Rivals in power and in love, and female regents in a masculine world, the two must decide how to play the game of marriage versus independence. Determined to rule as much more than a figurehead, Mary asserts her claim to the English throne, threatening Elizabeth’s sovereignty. Betrayal, rebellion, and conspiracies within each court imperil both thrones – and change the course of history.

Little did I know 2018 would be the year we launched the English/Scottish conflict cinematic universe.  Between this and Outlaw King, everyone should be a romanticized expert on the subject based on how much content we have received this year.  While Outlaw King should be recognized solely for the entertaining action sequences and solid performances, Mary Queen of Scots does not provide the same level of quality.  While Ronan provides another strong performance to her budding career and the costumes and makeup are impressive, I never felt as the story had a real purpose.  I am sure there is an interesting story in there somewhere, but Mary Queen of Scots was not what I was anticipating, and not in a good way.

The film follows Mary (Ronan), the Queen of Scotland who has returned home after spending much of her early life in France.  Seeing an opportunity to expand her power, Mary demands that her cousin Elizabeth (Robbie), the Queen of England, name Mary and her son the successor to the English throne.  Naturally this causes problems as the English are not exactly fond of being ruled by a Scot and vice-versa, so this sets up a series of diplomatic assignments that will affect the futures of both nations forever.  The main thing that stands out about this movie is the performance of Ronan in the lead role. Since the story is told predominantly from Mary’s perspective, Ronan needed to provide a performance that makes us identify with her and her struggle for dominance.  While I do not believe the script did Ronan any favors, she does an excellent job of showing us why we should care about her and support her claim to the throne.  Robbie on the other hand is a much more sympathetic character, if not a confusing one, but she gives another solid performance nonetheless.  Outside of the acting, the hairstyling and makeup are absolutely some of the most impressive of the year.  The work done on Robbie makes her almost unrecognizable and makes the experience that much more immersive. While Robbie is the main feature of the makeup, Ronan and the supporting characters are provided with costumes that fit the time period and make us feel like we are actually in Scotland.  The main issue is that the story is just mind-numbingly boring and will be a turn off for general audiences.  While the promotional material sets this up to be more of a dramatic war between Mary and Elizabeth, this movie ends up being mostly political squabbling with very little resolution getting solved.  Regarding the two main characters, the strange thing about this film is that the two hardly directly interact with one another at all.  You would think that a movie with such a level of starpower that you would find a way to get them on-screen together for more than a couple of minutes in the 125 minute runtime.  Instead, most of their interactions happen by way of convoy and we never really get the necessary exposure to their relationship.  Looking at the plot from a linear standpoint, what could have been an interesting exposé on the troubled relationship between two cousins warring for royalty ended up looking like a bad episode of House of Cards from the Scottish perspective while the English had to decide how they want to react, and naturally this becomes a chore to get through.

Overall, while this film is not necessarily bad, there is no excuse as to why it was not better.  Maybe this will slip in a few categories during the awards season, but this is a real disappointment when you look at the level of talent associated with this movie.  I traditionally like historical dramas and biopics, but Mary Queen of Scots focuses far more on the bureaucracy of kingdoms and less on the actual relationship between two bitter rivals.