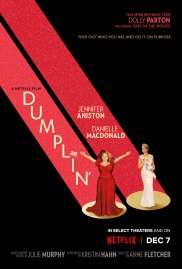 Synopsis from Rotten Tomatoes: Dumplin’ (Danielle Macdonald) is the plus-size, teenage daughter of a former beauty queen (Jennifer Aniston), who signs up for her mom’s pageant as a protest that escalates when other contestants follow her footsteps, revolutionizing the pageant and their small Texas town.

Dumplin’ is the type of movie that falls into the treacherous cycle of, “a tale of two movies,” syndrome, but it manages to do so in a way that I rarely see.  While most of these movies start of strong and then have a tough time figuring out how to finish, in Dumplin’s case, the film is established on a foundation of Play-Doh before finally turning it around towards the end.  The main issue with this strategy is that the damage has already been done and any sort of redemption feels underwhelming because of the agony we had to suffer through in the first half.  While I believe the film means well, it has a very poor way of showing it as Dumplin’ is incredibly mean-spirited at its core before finally turning it around towards the end.

The film follows Willowdean Dickson (Macdonald), an extremely overweight teenager whose mother Rosie (Aniston) runs the town’s yearly beauty pageant.  Due to the growing distance between the two and her mother’s obsession with this pageant, Willowdean decides to enter the pageant as a protest against her mother’s passion. Herein lies the main issue with the movie, Willowdean never really stands for anything other than to make her mother miserable.  When she recruits other girls to join her protest, they ask, “what are we protesting?”  This seems like a very logical question to ask before signing up for something, and Willowdean cannot provide an actual answer to this question.  At one point the patriarchal beauty standards are brought up as a reason, but is she aiming her protest in the right direction?  The only people who make comments about her weight in the entire movie are a couple of strangers who we never see again.  Rosie never comments on it, Willowdean’s friends never comment on it, not even the other girls she is competing against say anything.  Those girls all help one another because they see this as a fun experience that they will only get once in their lives so they need to make the most of it.  It always felt like Willowdean is taking out all of her personal anger towards her mother and the loss of her aunt on the people who had nothing to do with it.  Willowdean’s main point appears to be, “I am miserable and therefore you need to be too.” It is evident that Willowdean has incredibly low self-esteem, especially regarding her relationship with Bo (Luke Benward), and she does what many people do in her situation; blame others and never actually address the problem.  When Willowdean finally decides not to be mean-spirited anymore, we are way too far into the movie for any true redemption to occur.  The main character in this movie should have been Millie (Baillio), as she has the same physical struggles that Willowdean has, but never complains about them and does whatever she can to compete and have fun with the more attractive girls.  Willowdean just tries too hard to weaponize this event due to her own insecurities and ends up aiming it at the wrong people.

Overall, eventually Dumplin’ gets to where it should have gone, but it does so in the most excruciating way possible.  If the film had toned down Willowdean’s anger in the first place, I am not so sure I would have disliked it as much as I did.  Regardless of my personal distaste for the first act, I can recognize that the final stages of the movie were fairly entertaining even as someone who is not apart of the target demographic for this film.  As far as coming-of-age comedies go, Dumplin’ is certainly not one of the best, but it could have ended up being so much worse.