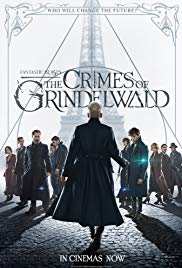 Synopsis from Rotten Tomatoes: At the end of the first film, the powerful Dark wizard Gellert Grindelwald (Depp) was captured by MACUSA (Magical Congress of the United States of America), with the help of Newt Scamander (Redmayne). But, making good on his threat, Grindelwald escaped custody and has set about gathering followers, most unsuspecting of his true agenda: to raise pure-blood wizards up to rule over all non-magical beings. In an effort to thwart Grindelwald’s plans, Albus Dumbledore (Law) enlists his former student Newt Scamander, who agrees to help, unaware of the dangers that lie ahead. Lines are drawn as love and loyalty are tested, even among the truest friends and family, in an increasingly divided wizarding world.

Well after 17 years and 10 movies, it was only a matter of time before the Harry Potter film series ended up releasing a bad movie.  One of the things that has made these films so incredible in the past was the sense of awe and wonder created by the magical elements and also the looming threat of an intriguing and menacing villain, and while Johnny Depp owns his role as the films villain, the film is devoid of anything as magical as the previous films.  While Depp and Jude Law are incredible in their roles, a distinct lack of anything fun as well a plot that goes completely off the rails in the third act definitely make Fantastic Beasts: The Crimes of Grindelwald the worst movie of the Harry Potter franchise.

The film follows Grindelwald (Johnny Depp) after he escapes a prison transfer and is back in the public.  After his escape, Grindelwald wants to track down Credence (Ezra Miller), the only wizard that Grindelwald believes can kill Albus Dumbledore (Jude Law). Dumbledore recruits Newt Scamander (Redmayne) to find Credence before Grindelwald does.  The one thing this film does very well is it is very clear where the $200 million dollar budget was spent.  The very few scenes with the titular fantastic beasts stand out and make you feel like you are apart of the movie’s world.  Specifically, the scene at the street circus is one of the most impressive of the film and one of the few moments we get to see the real magic of this movie on display, and these are honestly some of the best parts of the movie.  The colors are bright and distinct, the graphics are stunning, and I felt like I was truly watching a Harry Potter movie again.  Outside of the effects, the acting of both Depp and Law are the two performances that really stand out for just how impressive they are.  Depp is the villain that the Harry Potter world has needed this entire time.  He is menacing and powerful, but at the same time presents an interesting motive and makes you drawn to the way he thinks and the actions he takes.  Law on the other hand, is almost exactly how I would expect a young Albus Dumbledore to act, speak, and think.  Equally charismatic in his own right, his presence causes its own level of mischief, but it always ends up being worth it as Dumbledore can never really do any wrong.  So at this point, the effects have been impressive, the acting has been intriguing, what could possibly go wrong as we close this movie out?  Well, the third act is absolutely atrocious to the point where those who really love these movies might end up getting angry.  The third act is when the movie decides to suddenly become Fantastic Beasts The LeStrange Family Secrets, as much of the focus shifts to Leta LeStrange (Zoe Kravitz) and her issues that stem from her childhood.  The thing is though, that at no point did I ever care about her problems and the consequences that come from it.  The fact this supposed side-plot ended up seeping into the main plot and potentially becoming a main issue for other characters was aggravating to see and eventually just ended up being boring.  Combine this with Grindelwald going off the rails and other minor characters making decisions that make absolutely no sense are what makes Fantastic Beasts The Crimes of Grindelwald one of the most disjointed and jumbled messes of 2018.

Overall, this movie had the opportunity to be one of the more epic installments of the Harry Potter franchise, but it ended up just being an unorganized, if not aesthetically pleasing, 134 minutes.  Redmayne is always solid in whatever role he decides to pursue and Law and Depp will naturally follow suit, but the same cannot be said for some of the other actors in this film.  While there are bright spots littered throughout the film, Fantastic Beasts The Crimes of Grindelwald ends up as nothing more than a fantastic mess.