The Old Man and the Gun Review 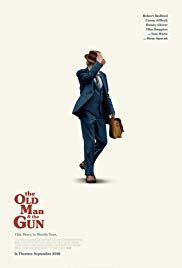 Synopsis from Rotten Tomatoes: OLD MAN AND THE GUN is based on the true story of Forrest Tucker (Robert Redford), from his audacious escape from San Quentin at the age of 70 to an unprecedented string of heists that confounded authorities and enchanted the public. Wrapped up in the pursuit are detective John Hunt (Casey Affleck), who becomes captivated with Forrest’s commitment to his craft, and a woman (Sissy Spacek), who loves him in spite of his chosen profession.

No one can argue that Robert Redford has had anything short of a legendary movie career.  Barring him pulling a Daniel Day-Lewis and coming out of retirement, this could very well be the last time we see Redford on our screens.  If this truly is the curtain call for the Sundance Kid, then it has been a well-made career and I wish him a happy and healthy retirement.  Regarding the actual movie, while it is not the best of Redford’s storied career, the chemistry between Redford and Spacek and the charming story make The Old Man & the Gun a charming, light-hearted, and enjoyable send-off to Redford’s career.

The movie follows Forrest Tucker (Redford) a career criminal who has robbed dozens of banks over the course of his lifetime.  While he is escaping one of his robberies, he meets Jewel (Spacek) and the two begin a friendship that eventually becomes romantic.  Jewel is kept ignorant on Forrest’s criminal activities and Forrest must balance his life of crime with his newfound relationship with Jewel.  On top of this, Detective John Hunt (Affleck) is determined to figure out who is responsible for all of the robberies and will stop at nothing to make sure that Forrest receives justice.  The main thing the film does well is it captivates the audience with the charming performances.  Redford and Spacek have incredible chemistry together and you cannot help but smile whenever they have a scene together.  There have been a plethora of movies made about morally ambiguous criminals and if the ends justify the means, but we do not often see a performance as captivating as Redford’s.  Normally we will root for the criminals because we know it will build up to a point of tension that interests us, but in this case we root for Forrest because of just how nice and likable he is.  He robs banks not on necessity, but because he likes it and is good at it and no one gets hurt in the process.  Outside of Redford though, I have to say the film is a little boring for my taste.  The pacing is very poor, as the film is only 93 minutes long but ends up feeling much longer.  Affleck’s character never really interested me and while he served as an interesting foil to Redford’s character, it was not enough to keep me interested in his background and why he wants to capture Forrest so badly.  Redford’s charm and charisma can only take this movie so far, as I needed just a bit more out of it if I were to consider to be one of my favorites for the year.  The foundation of an elite movie was present, and while the film is a solid time, it just did not capitalize on that foundation enough to take the next steps necessary. While I wish that Redford’s final films was one of his best, by no means should this film be discredited as it still has enough joy and humor to take you through the slow parts and make you care about the two lead characters.

Overall, Redford has earned the right to end his acting career any way he wants to, and in a certain way The Old Man & the Gun is an appropriate film to go out on.  For a career that begin as a charming Western criminal to end as a charming Western criminal is poetic in a sense that very few people could pave their own path this way.  Redford and Spacek carry this film as a fascinating, dynamic duo that are always a pleasure to see together.  If this is indeed Redford’s ride off into the sunset, then everyone who has ever watched one of his films wishes him the best of luck with whatever he decides to do moving forward, because he has certainly earned his retirement.