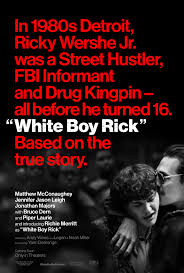 Synopsis from Rotten Tomatoes: Set in 1980s Detroit at the height of the crack epidemic and the War on Drugs, WHITE BOY RICK is based on the moving true story of a blue-collar father and his teenage son, Rick Wershe, who became an undercover police informant and later a drug dealer, before he was abandoned by his handlers and sentenced to life in prison.

About once a year, we get a director’s attempt to make this generation’s version of Goodfellas, and White Boy Rick is this year’s attempt.  After watching it, I can safely assess that White Boy Rick is not this generation’s Goodfellas.  While the acting is good, especially from a legend like McConaughey and a newcomer like Merritt, the film just feels far too much for its own good.  At 116 minutes, it is not a particularly long film, but the way it tries to weave so many stories together makes it feel much longer than it actually is.  Do not get me wrong, the film is still very interesting and entertaining, but it was about 10 minutes too long for its own good and probably should have focused on one story more instead of the decision to split the movie into two separate stories.

The film follows Rick Wershe Jr. (Merritt), also known as, “White Boy Rick,” a poor teenager in Detroit who works with his father (McConaughey) to deal firearms to various people in the community.  When the FBI wants to arrest Rick’s father for his illegal gun sales, they instead recruit Rick Jr. to work for them as an informant and to find sources of the various drug trades in Detroit.  As years pass and Rick gains more power within the drug industry, he has to decide who the real enemy is and how he can help his family the most.  One of the things that works most about this movie is the chemistry between the lead actors.  McConaughey, Merritt, and Powley all act as if they have been a family struggling for years with poverty and are just looking for their one opportunity to break that cycle.  What surprised me most about the acting is that the most emotional scene did not come from McConaughey or Merritt, but from Powley in one of the turning points for her character.  I did not really see it coming and did not anticipate the level of power and emotion in that scene, so I applaud her for being able to step up and act with some of the more seasoned actors.  One of the issues the film has though is that it tries to tell two separate, detailed stories over the course of one movie.  One story is about Rick’s time as an informant for the FBI, while the other story is about Rick’s rise to power within the drug industry of Detroit.  Both of these stories are complex, multi-layered stories that needed a lot of time to be fully developed.  Instead, there is a quick transition between these stories after a moment of real tension, but it still left me with questions about both storylines.  The real mainstay of the movie is the relationships between the various family members, and those bonds get less developed as the movie shifts to its second half.  Had this movie decided to focus on one of these stories exclusively instead of trying to cram two incredibly complex and bizarre stories into one movie, I think it could have been something special that could have challenged Goodfellas.  Instead, the film was just too bloated for its own good and took an exciting premise and dulled it down for the sake of fitting in as much information as possible.

Overall, while the acting is superb and the premise is interesting enough to entertain almost anyone, this is an ambitious film that just tries to do too much with a limited amount of time.  I think with the amount of content this film was trying to tell us and the amount of the story they left, this might have worked better as a mini-series on HBO or Netflix.  While I am certainly glad that I saw this film, especially since I will watch any movie with McConaughey in it, the movie probably should have cut out certain scenes and focused more on one story instead of trying to do too much in too little time.