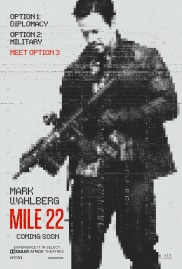 Synopsis from Rotten Tomatoes: In a visceral modern thriller from the director of Lone Survivor, Mark Wahlberg stars as James Silva, an operative of the CIA’s most highly-prized and least understood unit. Aided by a top-secret tactical command team, Silva must retrieve and transport an asset who holds life-threatening information to Mile 22 for extraction before the enemy closes in.

After working with Mark Wahlberg on Lone Survivor, Deepwater Horizon, and Patriots Day, Peter Berg teams up with Wahlberg again and instead of working on a thriller based off of true stories, they decided to make an action movie based on fiction.  Taking into consideration their history, one would assume that there would be a certain level of quality associated with their movies and that level quality should be expected in Mile 22. What we get instead is a story that has been done hundreds of times, characters that have absolutely no depth, and some of the worst editing I have seen in a movie with this type of budget.

The film follows James Silva (Wahlberg), the leader of an elite undercover government organization that handles missions where this team is considered the last resort.  In their most recent mission, a high-ranking police officer named Li Noor (Uwais) who is seeking asylum in the United States and is willing to give up secret intel from his own government to do so.  Now equipped with a high-level target, James and his team must make sure that Li safely gets out of the country and that the information he gives them prevents an international tragedy.  Starting out with the plot, this is the type we have seen repeatedly before with nothing new to add to it.  This is your generic, “good Americans fight for freedom while evil foreigners try to stop us from having our freedom,” movie and at no point did I think this film did something unique or interesting.  Add to this some pretty weak sequel-bait that appeared to be an attempt at something a little different, but that ultimately fails flat and you end up with a story that is pretty boring for as intense of an action movie this is supposed to be.  Moving on to the characters, it takes a great deal of talent to write characters that are so bland and one-dimensional.  Wahlberg’s character only has one scene of development and it is in the opening credits.  I do not know how we were supposed to learn a character’s entire backstory and motivation within a five-minute scene, but apparently that is the direction that this film went with.  The supporting characters have little to no development at all, which means any time these characters are wounded or face serious danger, I do not care what the end result is.  Cohen’s character has a couple of scenes where they show her life outside of the group, but ultimately there is no link between the main plot and her home life.  The other characters are given no scenes where they show us they are anything other than weapons of war, and at no point do these characters try to connect to the audience in any way.  Finally, Mile 22 will be most notable for having not just some of the worst editing of 2018, but this has the worst cuts in recent memory.  This movie reminds me of action movies from the early 2000’s where if people thought that if you cut the scenes hundreds of times and made the action impossible to see, that people would somehow enjoy the movie more.  These cuts are borderline unwatchable, as they are so quick you do not have enough time to digest the action that just happened.  This is very disappointing, because while some of the other action movies to come out this summer could be bland or boring, at least I can sit down and enjoy them.  Mile 22 sucks all the fun out of the theater by making you feel like you have vertigo while being punished with horrible performances for the entire runtime.

Overall, Mile 22 does not have a whole lot going for it, and with the exception of a few moments where Uwais shows off his talent, the film is just a chore to get through.  Wahlberg’s character is unlikable for the sake of being unlikable and his deliver is probably his worst since The Happening.  When you have a movie that takes place in Southeast Asia, but there a multiple scenes with Colombian flags flying in the background from the location they shot the movie, you know you are probably in for a bad time.  I had a feeling that this would be just another one of your typical summer popcorn movies, but Mile 22 cannot even manage to be that.