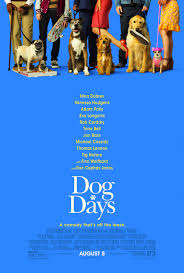 Synopsis from Rotten Tomatoes: From acclaimed production company LD Entertainment (The Zookeeper’s Wife, Jackie, and Megan Leavey) and Director Ken Marino comes Dog Days. Dog Days is a hilarious and heartfelt ensemble comedy that follows the lives of multiple dog owners and their beloved fluffy pals around sunny Los Angeles. When these human and canine’s paths start to intertwine, their lives begin changing in ways they never expected.

While Slender Man may have been this weekend’s contender for dumbest movie of 2018, Dog Days may be a contender for most benevolent.  This is a movie that is filled with positive moments from beginning to end.  While the film will leave almost anyone who watches it happy, there are still some pretty major issues with it.  With jokes that routinely fall flat, multiple cookie cutter plotlines, and a runtime that feels unnecessarily long, Dog Days has a good heart, but ultimately is too unoriginal to be anything other than your typical, feel-good summer movie.

The film follows multiple people (including Longoria, Dobrev, Caro, and Hudgens), and how dogs impact the wellbeing of their lives and how their lives end up becoming intertwined with one another.  For the most part, the actors have really good chemistry with one another and appear to be having a great time acting with each other.  This is an incredibly light movie for the most part, and you can tell nobody is taking their roles very seriously, but not in a way that detracts from the movie.  Outside of that, when the film decides to get heavy for two moments, it hits pretty hard even if you see them coming.  I was not super emotionally invested in any of the characters, but there is one moment in particular that really goes out of its way to get you to cry.  For a movie that is based on everyone having fun with their dogs, I was surprised to see moments that actually tried to break the mold and make us care about the characters involved.

Outside of those moments, one of the biggest issues is the fact that this film did not need to have a runtime of 113 minutes.  This movie easily could have had 20 minutes trimmed off of it and the easiest way this could have been done is if one of the multiple storylines was cut from the film.  This movie has twice as many storylines as Avengers: Infinity War and even that had ten years of backstory to warrant the length and the detail that those storylines had.  These storylines also make the ending of the film last forever, because every time you think, “oh good, the movie is wrapping up,” an older storyline comes back so we get the conclusion to that.  Regarding the comedy, if you like awkward jokes, this is definitely the movie for you.  Many of the jokes, especially in the first half as the characters are being developed, are about how awkward they, usually around other characters.  Occasionally there is a joke or two that hits its mark and made me laugh, but ultimately I ended up cringing more that laughing most of the time.  While the rest of the film is lighthearted and cute, the moments outside of that tend to drag on and grate on my nerves.  If you want to turn your brain off for a couple of hours, Dogs Days will do the job for you, but expecting anything outside of that is a huge mistake.

Overall, while Dogs Days is by no means a bad time, it did not do anything that we have not already seen before.  I believe this movie was an excuse for a bunch of celebrity friends to hang out and show us some of the landmarks around Los Angeles, but the film itself is pretty mediocre.  Dog lovers will have a field day with this movie, as the canine actors are the real stars of the show, but really outside of that, this movie is nothing more than a solid streaming option on a lazy Sunday afternoon.