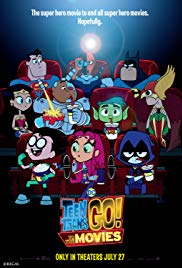 Synopsis from Rotten Tomatoes: When the Teen Titans go to the big screen, they go big! “Teen Titans GO! to the Movies” finds our egocentric, wildly satirical Super Heroes in their first feature film extravaganza – a fresh, gleefully clever, kid-appropriately crass and tongue-in-cheek play on the superhero genre, complete with musical numbers. It seems to the Teens that all the major superheroes out there are starring in their own movies everyone but the Teen Titans, that is! But de facto leader Robin is determined to remedy the situation, and be seen as a star instead of a sidekick. If only they could get the hottest Hollywood film director to notice them. With a few madcap ideas and a song in their heart, the Teen Titans head to Tinsel Town, certain to pull off their dream. But when the group is radically misdirected by a seriously super villain and his maniacal plan to take over the Earth, things really go awry. The team finds their friendship and their fighting spirit failing, putting the very fate of the Teen Titans themselves on the line!

One of the things that can separate average kids movies from great kids movies is the ability to reach an audience outside of who it is intended to reach.  While Teen Titans Go! To the Movies can struggle with this at times, it far exceeds the ability that most of its rival films struggle with.  Combining impressive animation with humor that almost anyone can enjoy, this movie has been one of the more pleasant surprises of the summer and is one of the better films your children can watch this year.

The film follows the Teen Titans as they try to overcome their status in the hero community as goofballs and want to be recognized with their own movie deals like all of their favorite heroes have.  As they realize this may be harder than they anticipated, their leader Robin (voiced by Menville) becomes hungrier for fame than the other four members and this causes a strain on their relationship.  As this tension develops, their new nemesis Slade (voiced by Will Arnett) plans his criminal activities around the world. One of the main things that stands out is the animation style and direction of the movie. The film has multiple scenes that are colorful and well-animated and are appealing to people outside of the intended audience.  This film had a fairly small budget for an animated film and based on the cast alone, you would think there would not be much money left to increase the visual quality from television to film, but the film is bright, captivating, and fun to watch.  Outside of the animation, I enjoyed the fact that this film has the ability to make fun of itself and other films within the DC universe.  The film takes various pop culture references both from their universe and other movies and television shows that should age well compared to other attempts at this from other movies.  You might end up a little lost if you do not follow these movies closely, but for those who do most of these jokes hit their mark.  Where the film struggles a bit is that there is a lot of juvenile humor.  I understand who this film is intended for, so I expected a fair amount of silly fart jokes, but this film showed many times throughout that it did not need to rely on those to get the laughs it was looking for.  I thought many times while watching this movie that this is essentially Deadpool for children, and instead of cursing and making crude references, the film goes the opposite direction and goes for jokes that are incredibly easy to write.  A few of these every once in a while come with the territory of a movie like this, but after a while they start to get repetitive and grating to those like me who are not in love with this type of humor.  When you show the audience you have the ability to do more and then go for lay-up jokes instead of jokes that push the envelope a bit, it can leave a bad taste in our mouths, because we know this film had the talent to turn it into something special.

Overall, while not the greatest animated film of all time, Teen Titans Go! To the Movies pleasantly surprised me and is something I would recommend for any parents looking to spend some time with their kids at the movies this summer.  The film does not take itself seriously at all and embraces the things about it that could have made it terrible while turning them into a positive.  While it might get a little childish at times for the adult viewers, it is not bad enough to repel anyone and should be a pleasant time for everyone involved.