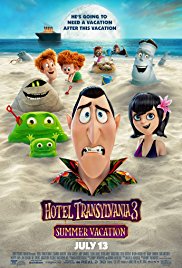 Synopsis from Rotten Tomatoes: In Sony Pictures Animation’s Hotel Transylvania 3: Summer Vacation, join our favorite monster family as they embark on a vacation on a luxury monster cruise ship so Drac can take a summer vacation from providing everyone else’s vacation at the hotel. It’s smooth sailing for Drac’s Pack as the monsters indulge in all of the shipboard fun the cruise has to offer, from monster volleyball to exotic excursions, and catching up on their moon tans. But the dream vacation turns into a nightmare when Mavis realizes Drac has fallen for the mysterious captain of the ship, Ericka, who hides a dangerous secret that could destroy all of monsterkind.

If you want a movie where you and your kids can sit down and relax for 97 minutes, Hotel Transylvania 3: Summer Vacation may be the best movie for you to see this summer.  This is a pretty mindless film that does not attempt to reach any audience outside of young children, but if you a part of that audience, you should be able to have a pretty good time with this movie.  Nothing about this film is particularly interesting or unique, and at times it can get borderline annoying, but Hotel Transylvania 3: Summer Vacation sets out to entertain little kids and their families and for the most part ends up succeeding.

The film follows Count Dracula (voiced by Sandler) as he longs for love in his life and has felt lonely since the passing of his wife.  His daughter Mavis (voiced by Gomez), misinterprets his loneliness for stress and decides the family needs to take a vacation together so they can spend some time together.  She books them time on a cruise for monsters run by Captain Ericka (voiced Kathryn Hahn) who unbeknownst to the monsters on the ship is the great-granddaughter of monster hunter Abraham Van Helsing (voiced by Jim Gaffigan) and the cruise is just a trap so he can finally kill Dracula. As Dracula and Ericka’s relationship develops, we get to see the complexities of a human/monster relationship and the impact it has on the people around them. Regarding the humor, it is not exactly unfunny, but none of the moments ever made me really laugh or snicker.  I see the attempt at humor and I know that it will absolutely appeal to certain audiences, but it did not do it for me.  There are the super annoying moments that appear sporadically throughout the film such as Adam Sandler making the stupid gibberish noises that he has been making for the past 30 years and a dance number at the end that lasts way too long, but these moments are few and far between. The story matches the humor as it is just as generic and boring as the jokes are.  It is a very by-the-books three act narrative that makes sense from a linear storytelling perspective, but does nothing that you would not expect.  Once again you have to place this film within the context of its intended audience, and recognize that it is not trying to be a super gripping or compelling story, and that is perfectly fine.  It succeeds at what it goes out to accomplish and does not give one more ounce of extra effort.  Hotel Transylvania 3: Summer Vacation follows the same generic formula that the first two movies follow, so while it may not be spectacular, at least these films are consistent.  One final thing to point out is that the animation felt as uninspired as the rest of the movie. The first scene in particular on the train looked like it was half-finished and needed more time to be ironed out.  This is not something that should be happening in the third installment of a multimillion dollar franchise.  There were no other instances of this in the movie and the rest of the animation appeared to be passable at best, but this scene really sums just how bland, uninspired, and boring a film like this can be.

Overall, I do not think Hotel Transylvania 3: Summer Vacation will win any Academy Awards anytime soon, but that is not this film’s intention.  This film serves exclusively to entertain those with shorter attention spans and does a pretty solid job at that.  If you enjoyed the first two films, this addition is pretty much on the same level as its predecessors, so you should have a rather enjoyable time with this movie.  Anyone expecting high art will be disappointed, but if you want to spend a Sunday afternoon at the movies, Hotel Transylvania 3: Summer Vacation is not a bad option for you.