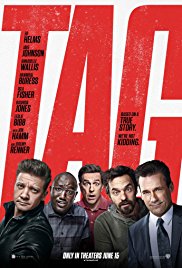 Synopsis from Rotten Tomatoes: For one month every year, five highly competitive friends hit the ground running in a no-holds-barred game of tag they’ve been playing since the first grade–risking their necks, their jobs and their relationships to take each other down with the battle cry “You’re It!” This year, the game coincides with the wedding of their only undefeated player, which should finally make him an easy target. But he knows they’re coming… and he’s ready. Based on a true story, “Tag” shows how far some guys will go to be the last man standing.

Comedies tend to be a very tricky genre to navigate.  On one end of the spectrum, you could get a movie like Game Night, which was surprisingly sharp and still performed quite well at the box office.  On the other hand, you could end up with Super Troopers 2 or one of the plethora of dumb comedies out there that cater to an easy demographic but do not do anything unique with their presence.  Tag is interesting, because somehow it manages to toe the line between these two extremes very closely.  At times it is absurdly stupid, but other points it is witty, charming, and heart-warming. Thanks mostly in part to a cast of veteran comedians who felt they were having a blast making this film, Tag manages to be one of the films that has surprised me the most this summer in the best way possible.

The film follows a group of five friends who get together every May to play a game of tag.  One of the players; Jerry (Renner), holds the distinction of being the only person who has never been tagged, and wants to retire after this year when he gets married. As a result, the other four players team up to do whatever it takes to finally tag Jerry. Starting off with Jerry’s character, I understand that he is supposed to be this guy that is really good at playing tag, but the film goes to some pretty extreme lengths to prove this point.  I understand that there is a very good chance that these events did not happen, but the scene in the woods at the golf course where Jerry sets traps that look like they were out of First Blood is a little too absurd for my personal liking.  There are other scenes like the scene where Jerry is in AA that while absurd, are a bit more realistic and add to the mystery of how this man avoided getting tagged for so many years.  Outside of that though, the rest of the cast has so much fun scheming with one another to see if they can finally accomplish their goal.  Hamm and Johnson both own their roles playing two people who would probably never associate with one another if they were not childhood friends, but their chemistry sells that they have been friends for years.  Kevin (Hannibal Buress) was my absolute favorite character in the movie. His dry, serious tone when bringing a sense a realism to their situation is a breath of fresh air to an otherwise goofy film.  I also really enjoyed how the film ended.  Sure it was kind of cheesy and expected, but it fit very well within the context of the rest of the film.  Seeing actual footage from the real people playing this game of tag and seeing some of the disguises and traps that they set for each other made me realize that these type of people actually exist in the world.  I was incredibly skeptical when they said that this movie was based on a true story, especially with how ridiculous most of it was, but seeing older men playing tag just has such a unique charm to it that is tough to replicate.

Overall, Tag defied almost all of the expectations that I had for it.  While it still has its problems, this had the potential to be an absolute trainwreck, and the fact that it was not is a testament to talent and comedic timing of the cast.  This is a movie with the simplest of concepts taken to the most extreme level, and while that level of absurdity is a little too unbelievable at times, Tag is a film with a warm message that comes from a fundamentally good place.