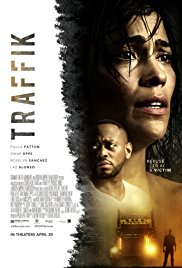 Synopsis from Rotten Tomatoes: In the action packed thriller, Traffik, Brea (Paula Patton) and John (Omar Epps) are off for a romantic weekend in the mountains. Isolated at a remote estate, the couple is surprised by the arrival of two friends, Darren (Laz Alonso) and Malia (Roselyn Sanchez). Just when the weekend starts to get back on track, a violent biker gang turns up and begins to torment them. The foursome are forced to fight for their lives against the gang who will stop at nothing to protect their secrets. The film is written and directed by Deon Taylor, and produced by Roxanne Avent, Paula Patton and Taylor. Codeblack Films, a division of Lionsgate will release the film wide on April 20, 2018.

Traffik is a very unique movie as it suffers from a very acute case, “A Tale of Two Movies Syndrome.”  The first half of the movie was honestly really good, with a somber score warning us of what is about to come, a very nice array of shots by two-time Academy Award nominee Dante Spinotti, and performances and a story that while not exactly original, were serviceable for the sake of the plot.  I kept thinking to myself, “Why is this film getting so poorly reviewed?”  Then, the second act hit, and I thought, “Ok I see where the problem is,” and it was all downhill from there.  Despite a promising story with some brilliant technical aspects, Traffik fails to deliver due to its repetitive and predictable second half.

The film follows Brea (Patton) and John (Epps), a young couple who go away to the scenic woods of Northern California for a romantic weekend.  They are joined by their two close friends Darren (Alonso) and Malia (Sanchez) who are also in a relationship.  Along the way, they encounter a local biker gang who harasses them and the gang’s female companion (Dawn Olivieri) runs into Brea in the restroom looking and acting like she is in dire need of help.  When the bikers find them in their cabin, it is a race for survival as the two couples do whatever they can to make it through the night.  As mentioned earlier, many of the cinematic aspects such as the score and the cinematography make this film something special.  The score hits you immediately as a somber tale that tells us the tragedies that will eventually happen and helps set a serious tone right from the opening scene.  The score is mostly soft string instruments that sound like they would be played at a funeral, and while it may not represent physical death, it may represent the death of innocence and freedom that girls who are trafficked go through, so it immediately tells us that things will go poorly for certain characters.  Spinotti on the other hand shows us exactly why he has been nominated for Academy Awards in the past.  The whole first act is a full on display of tight shots, mid shots, panoramic shots where the camera is still the whole time, and while I do not believe that they add an element to the story, they were certainly nice to look at.  Speaking of the story, while the first half is certainly no Casablanca, it does a good job of establishing the characters and their relationships.  I know enough about most of the characters and their history together in a short amount of time, which can be very tricky to pull off, so I give Deon Taylor credit for doing this so effectively in such a short amount of time.

Now, you are probably thinking to yourself, “This movie sounds pretty decent so far? Where does it all go wrong?” And that is exactly what I was thinking when I was watching it.  I thought the first half was more than serviceable and was confused as to what people did not like about this movie.  Then, the tone shift happened and the movie focused on its human trafficking side, which ended up crushing any positive elements the film had.  Any sort of technical aspects that made the first part so good were completely absent from this second half.  One of the worst offenders of this is a shot of Brea walking through the dark that is shot upside down.  Why would you choose this?  It adds nothing to the story and is only on-screen for about 15 seconds anyways, so why not just shot it like a normal tracking shot?  Regarding the editing, I can honestly say it was some of the worst I have ever seen.  There are multiple times throughout the first and second half where scenes will cut to black and fade back to our characters in the same area and the camera is in the same position.  It is almost as if the director asked the actors to do five or six takes of a scene and wanted to find a way to include all of them.  It is really distracting when you see it because you think we are about to move on to a new scene, and then it keeps fading back and forth.  On top of this, the plot that is supposed to be suspenseful and dramatic ends up being nothing more than recycled twists and tropes that we have seen before.  Of course their cell phones do not get reception out in the woods and their escape plans and continuously compromised, that would be way too easy.  The ending relies on just as many lucky moments as the rising action though, as the final actions are committed exclusively through luck. Then this movie has the audacity to try to lecture us on how many people suffer from human trafficking throughout the world. I understand that human trafficking is a very serious issue that impacts millions of people, but you cannot justify a text field at the end of a movie like that if you are not going to take your source material seriously.  I do not think anyone who saw this movie was immune to the idea that human trafficking is a massive problem, but I also do not believe they would be inspired to do something about it after this movie.

Overall, if this movie was 96 minutes of consistency instead of 48 minutes of a good movie and 48 minutes of a terrible movie, then I think the point that it was trying to make would have been more clear.  Instead, we got a movie that tries unsuccessfully to connect two worlds together and tries to make us feel for characters that I either did not like enough or did not care enough to feel anything for them. I do not know how Dante Spinotti ended up working on this movie, but he is the only thing keeping it afloat.  A little more time in the writer’s room and a little more film left on the cutting room floor could have established this as a very serviceable and thrilling movie, but instead this is what we are left with, a film that will live in the depths of mediocrity forever.