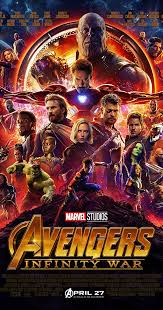 Synopsis from Rotten Tomatoes: An unprecedented cinematic journey ten years in the making and spanning the entire Marvel Cinematic Universe, Marvel Studios’ “Avengers: Infinity War” brings to the screen the ultimate, deadliest showdown of all time. The Avengers and their Super Hero allies must be willing to sacrifice all in an attempt to defeat the powerful Thanos before his blitz of devastation and ruin puts an end to the universe.

This is it.  The moment that millions of people have been waiting for.  10 years and 19 movies later, all of these characters, plots, motivations, and stories come together in an epic collaboration like we have never seen before.  The real question is, does it deliver on the scale that it presents itself? Through the chemistry of the cast and a plot that for maybe the first time in the Marvel Cinematic Universe has consequences, Avengers: Infinity War will satisfy everyone from superfans to casual viewers alike.

The story centers around Thanos (Josh Brolin) and his attempts to do whatever it takes to obtain the six Infinity Stones so that he can kill half of the universe’s population and bring order back to society.  Our heroes, including Iron Man (Downey Jr.), Thor (Hemsworth), Hulk (Ruffalo), and Captain America (Evans) find themselves all fighting against Thanos in their own ways and must use all of their combined strength and abilities if they want to have a chance at stopping Thanos.  One of the things that stood out immediately is how well-developed Thanos is as a villain.  We really learn a lot about Thanos throughout his time on-screen and he is much more complex than I thought he would be.  He is not a villain that is solely obsessed with power and destruction, he has a genuine motivation for his quest.  At times I found myself rooting for him not because I wanted him to succeed, but I wanted to see if someone could actually beat the Avengers. I believe Marvel has had a problem in the past with developing their villains with the exception of Loki (Tom Hiddleston) and to a lesser extent Killmonger from Black Panther, but those problems are absent from this film as we see just how complex and complicated a good villain can be.  Combine this with an emotional, tumultuous relationship with his adopted daughter Gamora (Zoe Saldana) and we get a villain that has both internal and external obstacles to overcome if he wants to succeed.  Outside of the villain, I really enjoyed the scale at which the film was presented.  Being that this is the 19th and most anticipated film in the Marvel Cinematic Universe, it is only fitting that the setting felt as epic as our expectations.  When we get a wide bird’s eye over Wakanda during one of the final battles, that was the moment for me when I thought, “this is what I have been waiting for.” All of the heroes and villains are coming together to finally battle it out with life or death consequences makes the buildup from several movies more than worth it.  Speaking of these characters, credit needs to be given to the Russo Brothers for their ability to take characters from movies not written or directed by them and combine them into not only a functional movie, but an exceptional one.  They seamlessly picked out which characters would interact well with one another and made sure that those storylines complimented each other.  This is no small task, so for these characters to act so naturally around complete strangers without it feeling awkward such the amount of talent these two brothers have.

While Avengers: Infinity War has more than its fair share of high points, that does not mean it is without fault.  Regarding the cinematography, I noticed towards the beginning that many of the fight scenes were shaky and unorganized.  I understand that we are supposed to feel a sense of urgency and panic, but the fight itself should already be doing this.  Fortunately, as stated before, the cinematography gets better towards the end, especially during the battle in Wakanda. Outside of that, at times the jumping between plots can get confusing.  I know that this is a complicated, multi-planet story that all connects to one another, but at times we get so invested in a particular section that we forget that things are happening in other stories.  While some people may give the Russo brothers credit for captivating us in a section of the film, I would argue that they can do that without keeping us too long in each section. I think a couple of extra transitions to other plots and then coming back would make the plot a little easier to follow.

Overall, we finally got a Marvel movie that I felt had real consequences.  The stakes felt high and I never felt as though the story was going to wimp out and take the easy route.  This is especially apparent in Tom Holland’s performance as SpiderMan, as he and many of his other allies finally realize the consequences of their actions and how this is not just some game.  Powered by an intensely captivating performance by Brolin as one of the strongest antagonists in recent memory the Russo Brothers hit on all cylinders and show us that this is the movie where Marvel finally grew up.