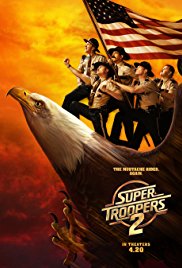 Synopsis from Rotten Tomatoes: Everyone’s favorite law enforcement team is back by popular demand with the long anticipated follow up to the cult comedy classic… SUPER TROOPERS. When an international border dispute arises between the U.S. and Canada, the Super Troopers- Mac, Thorny, Foster, Rabbit and Farva, are called in to set up a new Highway Patrol station in the disputed area. Unconventional police work follows, and the result is…SUPER TROOPERS 2.

The question I always try to ask when viewing a sequel that came out at least five years after the original movie is, “was this worth the wait?”  I have no real emotional attachment to the original Super Troopers, but I cannot deny that there are some pretty funny moments.  Unfortunately, Super Troopers 2 was not worth the 17 year wait.  Due to its juvenile and repetitive humor, predictable story, and heavy reliance on stereotypes, Super Troopers 2 makes every moment painful to watch as it fails to capture the magic that the original film had.

The film starts off many years after the events of the first film, where the main characters have been fired from the Spurbury Police Department and are working in various jobs such as construction and logging.  After getting a call from their former boss Captain John O’Hagen (Brian Cox), the crew are given their jobs back with the task of integrating a Canadian town that has actually been settled on U.S. land.  Now this crew must integrate themselves into a city that wants nothing to do with them while helping those people integrate into American society and face various problems along the way.  Here lies the first problem with the film.  This movie should just be retitled, “Americans are fat, loud, and stupid and Canadians play hockey, speak French, and use the metric system, the movie,” because those jokes make up the majority of the movie.  I understand that the two cultures have their distinct differences and that there is bound to be tension between the groups, but after 100 straight minutes of it that stuff starts to get old.  Outside of that, the characters did not exactly leave me with any feeling of joy afterwards.  Specifically, the character of Farva (Kevin Heffernan) was quite possibly one of the most annoying characters I have ever seen.  All of his jokes were at someone’s expense, but most if not all of them were malicious or mean-spirited.  I legitimately believe that he is a terrible person and was actively rooting for him to fail at all opportunities.  If he was even 1% sympathetic, then maybe I could give this a pass, but he was just unbearably obnoxious the entire time.  The one thing that I absolutely have to give credit to is the chemistry between the original cast.  When you have been doing comedy for so long as a group, you have an ability to bounce jokes off one another in a more efficient way than actors who have not worked with one another before.  In certain scenes you can tell that the cast is having a ton of fun just being themselves and working with material that took 17 years to create.  Speaking of the material, while most of it suffers from the problems listed above, there are a couple of moments that showed what this film could have been.  Every once in a while there are one-liners that come out of nowhere with their wit or sarcasm, and skits like the Danny Devito conversation between the Mounties actually made me laugh pretty hard.  Had the film consisted of moments like these and then callbacks to the famous moments from the original film, it honestly would have been a pretty solid movie.  Instead, we got a series of poorly written gags and low-level jokes that do nothing but annoy you for the film’s entire runtime.

Overall, I understand that it is very difficult, especially in the comedy genre, to recapture the magic of an original film in its sequel.  While diehard Super Troopers fans might enjoy the callbacks and specific type of humor that this group is known for, it will not make a fan out of anyone outside of the intended audience.  While there are moments that someone with no background on the original film can understand and find amusing, they are weighed down by too many unlikable characters and easy stereotypes that get boring very quickly.  The foundation for a funny, successful movie was there, but unfortunately Super Troopers 2 could not recognize that potential and went with what is easy instead of what is actually funny.