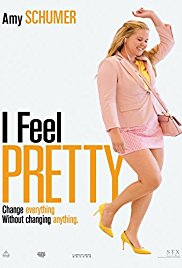 Synopsis from Rotten Tomatoes: In I FEEL PRETTY a woman who struggles with feelings of deep insecurity and low self-esteem, that hold her back everyday, wakes from a brutal fall in an exercise class believing she is suddenly a supermodel. With this newfound confidence she is empowered to live her life fearlessly and flawlessly, but what will happen when she realizes her appearance never changed?

Amy Schumer has a particular brand of humor that obviously does not appeal to everyone.  She tends to be very crude, sexual, and descriptive with her jokes in a way that may leave some people alienated by her.  Since I Feel Pretty is rated PG-13 instead of R, this provides her an interesting opportunity to still showcase her unique style of humor but toning it down for a wider audience.  The real question is, how did this new format work out?  And my answer is; not great.  While there are a fair amount of funny and light-hearted moments, it is plagued with inconsistencies and a lead actress who is very difficult to root for.

The film follows Renee (Schumer) a woman who has insecurities about her appearance in a world where women are valued only for their physical features.  In a freak accident at the gym, she starts seeing herself in the way she wants to look without any changes actually occurring.  With this newfound sense of confidence, Renee must navigate the world and overcome the obstacles she discovers because of this confidence.  Schumer’s transition from R-rated comedy to PG-13 comedy really worked well in certain situations and in others it kind of fell flat.  The film had to rely a little bit more on physical humor, wordplay, and sarcasm, and while I like the later two, the former only works for me in certain situations.  Renee getting her ponytail ripped out on a gym bike is not one of those situations.  There were certain jokes though that I legitimately laughed at, which I do not think I would have if they riddled with profanity or crude references.  I tend to like subtle humor, so when Ethan (Scovel) makes a comment about Renee’s confidence of decision-making, it really lands harder than most of the other jokes.  Speaking of Ethan, he is one the main characters that suffers from the main flaw of the film; Renee thinks she is the only person with problems and downplays everyone else’s struggles.  The premise of Renee’s transformation is that she wants change to happen magically, without any effort or sacrifice.  When Ethan does zumba to get his exercise in, she belittles him for being feminine.  I thought the premise of this movie was, “be you and do whatever you like,” not, “you can’t make fun of for my flaws but I can judge you for yours.”  At least Ethan is doing something about his insecurities instead of just making a wish.  She does this multiple times throughout the film with her boss Avery (Williams) and her friend Mallory (Ratajkowski). All of these people have their issues, but all of them are doing something to live the life they want.  Renee believes that just because someone is more conventionally attractive than her that their life is perfect.  How delusional do you have to be to believe that?  All of those people make sacrifices and show advanced discipline that Renee does not have, but the one saving grace is that Renee starts to see the light by the end and realizes that just because you look up to someone does not mean they are perfect.  Could it have been a little more accepting of others along the way?  Of course it could, but hopefully people will come away from this with a less narcissistic attitude than Renee had at the beginning.

Overall, I Feel Pretty is far from perfect, but I think it accomplished most of what it set to achieve.  It had enough funny moments that took away from the rather unpleasant personality that was Renee for most of the film.  When you have a film that is about a person overcoming their shortcomings and changing for the better, regardless of what that change is, you have to make the audience identify with the character in some way.  There is a difference between a character being flawed and a character being unlikable, and unfortunately Renee dips into the unlikable side of things way too much for me to get behind the film.  While there are a decent amount of funny moments and a wholehearted yet flawed message, I Feel Pretty does not deliver in the way that I would expect Amy Schumer to by now.