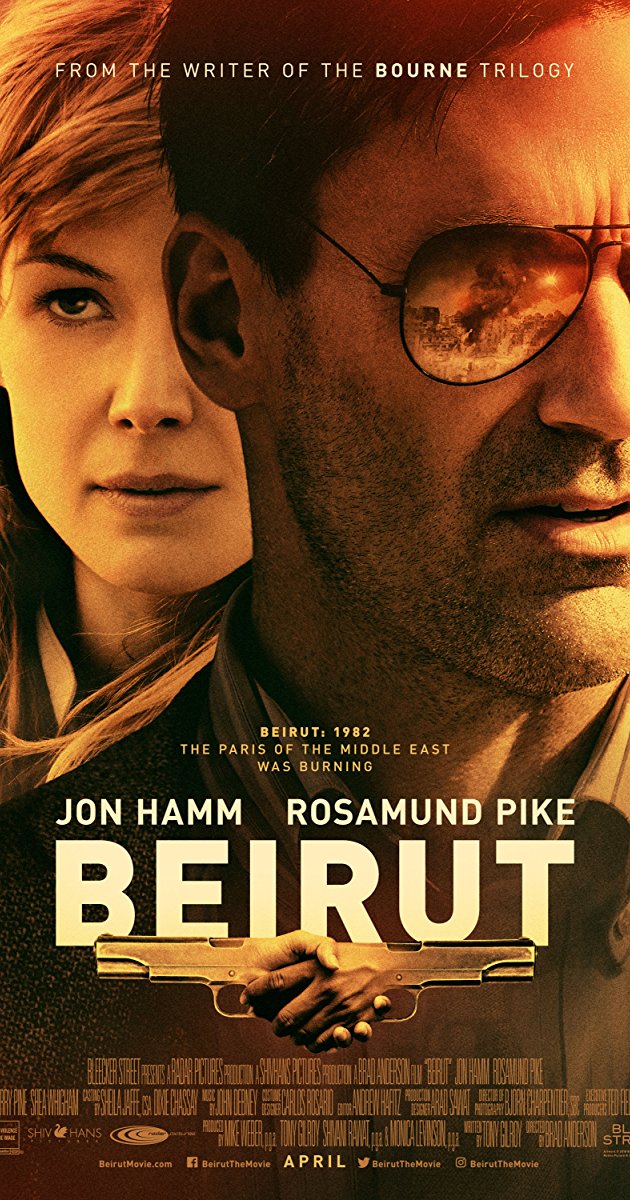 Synopsis from Rotten Tomatoes: Caught in the crossfires of civil war, CIA operatives (Rosamund Pike, Dean Norris) must send a former U.S. diplomat (Jon Hamm) to negotiate for the life of a friend he left behind.

The best comparison I can make for anyone wanting to watch Beirut is that it is like ordering a well-done steak.  It is still good, because all steak is good steak, but it lost a lot of its flavor by cooking it for too long.  While the performance of Hamm in the lead role was captivating and the film did a good job of establishing the world that Mason (Hamm) lives and works in, shaky camerawork and dialogue that drudges along undermine an interesting story with talented actors.

The film follows Mason Skiles, an alcoholic former U.S. diplomat to Beirut who is recruited by the government to perform one more diplomatic mission for them.  Mason has no intention of ever going back to Beirut after his wife (Leila Bekhti) was killed in front of him during a shootout at his house in Beirut, but he finds out that one of his close friends Cal Riley (Mark Pellegrino) has been kidnapped and Mason is the only one who can get him free.  As someone who usually enjoys films about international issues and government actions, I felt as though Beirut did an excellent job of showing us how complicated the situation was and how real the stakes were.  The Lebanese Civil War had a lot of angles to it and a lot of moving parts for years, and the fact that the film showed all of these factions going against one another regardless of their political or ideological affiliation shows us how complicated and divided the situation was.  This leads to the main characters having to make and break deals with organizations all over the world, which backs up the original point even further. Hamm is exceptional in the lead role, as he has to come to terms with his past while also working day and night to save his friend.  Coming back to a city where your wife was murdered is tough enough, but doing so with the intention of preventing your friend from receiving the same fate could break even the strongest of men.  Hamm is charismatic enough where we can see his charm and wit on full display in some scenes, while also somber enough to show us the pain that Mason has gone through as well as his vices.

While Beirut instills a sense of suspense and tension throughout most of the film, it unfortunately comes up short in a couple of spots.  In regards to the writing, while the film requires a lot of dialogue to help set up the environment, there is such a thing as too much writing.  The first rule of storytelling is, “Show, Don’t Tell,” and while there are many moments that show us the discord that runs through the streets of Beirut, there is also a lot of time spent explaining the plot and the possible avenues that the mission could go and why it could fail.  While some of it absolutely necessary, often times it is just boring and tiring.  Speaking of boring, the cinematography cannot even keep a straight shot in the simplest of conversations.  It is almost as if the cinematographer got bored during these conversations and started to fall asleep at the helm.  It is a shame, because there is a beautiful tracking shot where Sandy (Pike) is in a building looking for Mason and examining what kind of damage their situation has caused, so the ability to shoot clear shots was there, but it was not effectively utilized.

Overall, Beirut can be a relatively tough film to get through due to its style and subject matter, but it is a decent enough film due to its direction and acting.  It is able to effectively tell a story that very realistically could have happened without feeling too corny or artificial.  Hamm and Pike are as energetic as ever in a role that is make or break depending on who is in it and how they manage the role.  Lebanon is not usually the subject of films about conflicts in the Middle East, and hopefully after Beirut we get to see more projects about some of the less represented countries in the future.