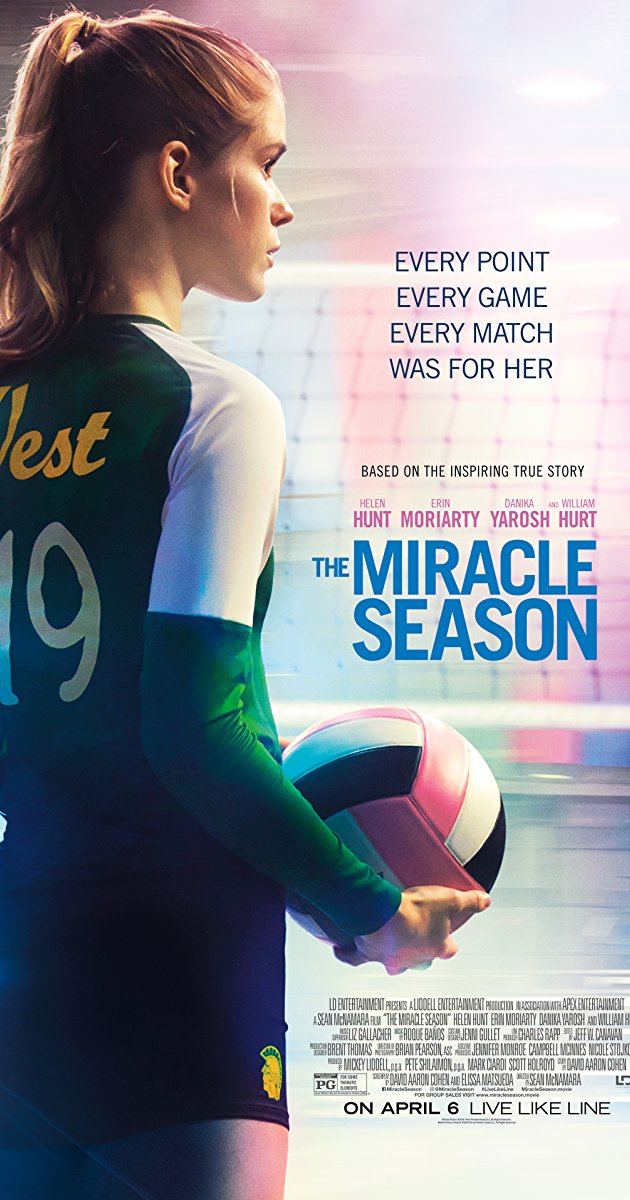 Synopsis from Rotten Tomatoes: Based on the inspiring true story of West High School girls’ volleyball team. After the loss of the school’s star player, Caroline “Line” Found, in an accident, the remaining team players must band together under the guidance of their tough-love coach in hope of winning the state championship.

I have a soft spot for sports movie in general, so I generally give them higher praise than they probably deserve.  Given the fact that there are so few sports movies about female athletes, The Miracle Season had an opportunity to be an emotionally captivating story to a non-traditional demographic.  While The Miracle Season hits its stride with the emotional elements of the film, the story-telling is generic and the subplots do not add anything useful to the rest of the movie.

The film follows a girl’s high school volleyball team led by their coach Kathy Bresnahan (Hunt) and their team captain Caroline Found (Yarosh) as they try to defend their Iowa state championship.  After a tragic moped accident that resulted in the death of Caroline, the team and the town must come together to help one another heal as well as continue to play volleyball without their star player.  The main draw of this movie is the emotional attachment that we feel towards the main characters. Yarosh is so charismatic as Caroline and her performance makes her inevitable death hit that much harder.  I am sure the real families this story is based on consulted with the filmmakers during this process, and I believe they would be thrilled with how positive, upbeat, and lively Yarosh was in the film.  Hunt is also strong as the head coach that cannot show weakness as the leader of these grieving girls and her development is filled with emotional highs and lows.  I particularly enjoyed how the film transitions from grief to guilt very smoothly.  Caroline’s best friend Kelley (Moriarty) and Caroline’s father Ernie (Hurt) have a conversation about how Kelley is responsible for Caroline’s death due to her lack of action, but Ernie says that there are many situations running through his mind about what he could have done on his end to prevent Caroline’s death.  I think anyone who has tragically lost a close friend or family member replays scenarios in their head to see what they could have done to prevent it, so this felt a very natural and thoughtful scene to occur.  Moments like this show the weight that this film carries and it is surprisingly emotional compared to other films within the genre.

Outside of the emotional moments, the film falls back into the clichés that plague the sports drama genre.  This is added by multiple subplots or supporting details that are either incredibly distracting or pointless.  The main one is the random romantic subplot that Kelley had.  This added absolutely nothing to the plot and at one point when it comes back after a long absence, I thought to myself, “oh yeah, this is still going on.”  The point of a subplot is either to add something to the story from a different perspective or show something of value that is outside of the main plot, but this romantic subplot really only panders to the predominantly female audience. Looking past that, I felt as though the character development within the team outside of Caroline and Kelley was extremely lacking.  There is a moment where Kelley overhears how her teammates are doubting her because she is one of the less talented members of the team.  This is never addressed again in the movie as the girls just mend fences from training together and winning games.  I have been out of high school for a long time, but I know teenage girls would not let stuff like that slide without some sort of drama ensuing.  All of the other girls are there almost to just exist, but we know they must have played some sort of role in the team’s success.  Replacing the romance plotline with supporting character development would have done wonders for the movie.  Combine all of this with some strange song choices during intense athletic moments and you get a movie that had a fair amount of potential, but wasted it.

Overall, while the film is one of the more emotionally gripping sports movies in recent memory, the actual sports moments are dull and lacking.  While the emotional moments are fine, it is certainly not on the same level as something like Remember the Titans and would probably be a dud outside of the genre.  While it has its flaws, The Miracle Season is perfectly enjoyable and a unique step to draw in a new audience to the genre.