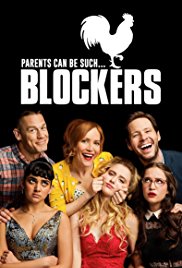 Synopsis from Rotten Tomatoes: When three parents stumble upon their daughters’ pact to lose their virginity at prom, they launch a covert one-night operation to stop the teens from sealing the deal. Leslie Mann (The Other Woman, This Is 40), Ike Barinholtz (Neighbors, Suicide Squad) and John Cena (Trainwreck, Sisters) star in Blockers, the directorial debut of Kay Cannon (writer of the Pitch Perfect series). The comedy is produced by Seth Rogen, Evan Goldberg and James Weaver, under their Point Grey Pictures banner (Neighbors, This Is the End), alongside Jon Hurwitz & Hayden Schlossberg (Harold & Kumar series) and DMG Entertainment’s Chris Fenton (47 Ronin). Good Universe’s Nathan Kahane and Joseph Drake (Don’t Breathe, Juno) executive produce with Chris Cowles (Collide) of DMG and Josh Fagen, Dave Stassen and Jonathan McCoy. The film is written by brothers Brian & Jim Kehoe, Hurwitz & Schlossberg and Eben Russell.

After writing all of the Pitch Perfect movies, Kay Cannon makes her directorial debut in Blockers.  The question is can Blockers harness the energy and originality of the first Pitch Perfect, or would it end up as a tired done to death story like Pitch Perfect 3? Through strongly developed characters, great comedic timing, and a plot that is as relatable as it is well-intentioned, Blockers took what could have been a bottom of the barrel concept and turned it into 102 minutes of fun.

The plot follows three parents, Lisa (Mann), Mitchell (Cena), and Hunter (Barinholtz) as their daughters, Julie (Newton), Kayla (Geraldine Viswanathan), and Sam (Gideon Adlon) go off to prom and the parents are not ready for these girls to move on to their lives after high school.  After accidental snooping, the parents find out that the girls intend on losing their virginities on prom night.  Fearing that their daughters are about to make a huge mistake, the parents team up to ruin their daughters nights and help them think about the decisions they are going to make.  The first thing that stood out to me was the chemistry of both groups.  The three teenage actresses all act as though they have known each other their whole lives are able to act off of one another with such ease as they really feel like they are having a good time.  As for the adult trio, the three lead actors play their roles perfectly.  Mann and Cena are excellent in their roles as overprotective parents who want to micromanage their children’s lives while Barinholtz plays the divorced dad who tries desperately to reconnect with his daughter before she leaves his life forever.  Since they are in the majority of the film, they have to carry most of the film and its comedy.  Mann is hilarious with her awkward physical comedy, Cena has some unexpectedly great one-liners, and Barinholtz uses pop culture references in a way that does not feel forced at all.  Since each of these characters has an agenda, they are able to switch allegiances in a moment’s notice, adding to the humor of their situation.  Barinholtz was the real standout for as the way his relationship with his daughter develops over the course of the film is surprisingly heartwarming.  Outside of that, I felt as though the film touched about many tough issues in an intelligent way while also being sensitive and funny at the same time.  Regarding the girls, the point is made that if they were three teenage boys, none of these parents would have a problem with it.  But since they are girls, the parents feel the need to be a protector and that they have to save their little girls from distress.  This point is surprisingly accurate and something that has been discussed more and more in the spotlight and pushes the issue of women’s equality without being excessive about it.  I have read a lot of people talking about how all the comedy in this movie is leftist propaganda, but those people clearly missed the discussion about Hunter’s divorce.  Hunter talks about how as soon as Lisa and Mitchell found out that he was getting divorced, they stopped talking to him without hearing his side of the story.  This is a surprisingly raw moment that happens to men more often than people think, but nobody wants to talk about it.  It was such a nice moment to see in a film like this and discuss an issue that impacts a different type of person.  While there were way too many gross-out moments for my liking, Blockers combines true family sensitivity with pure comedy in a way that is seldom done.

Overall, a risky comedy like Blockers could have been an absolute dumpster fire, but ended up being an absolute blast from start to finish.  I have heard some people say that Blockers is the female version of Superbad, and while I cannot give it that high of a praise since Superbad is one of my all-time favorite movies, Blockers is certainly in the ballpark.  It is rare to see a comedy so smart and original come out, so I hope that films like Blockers set the tone for the genre moving forward.