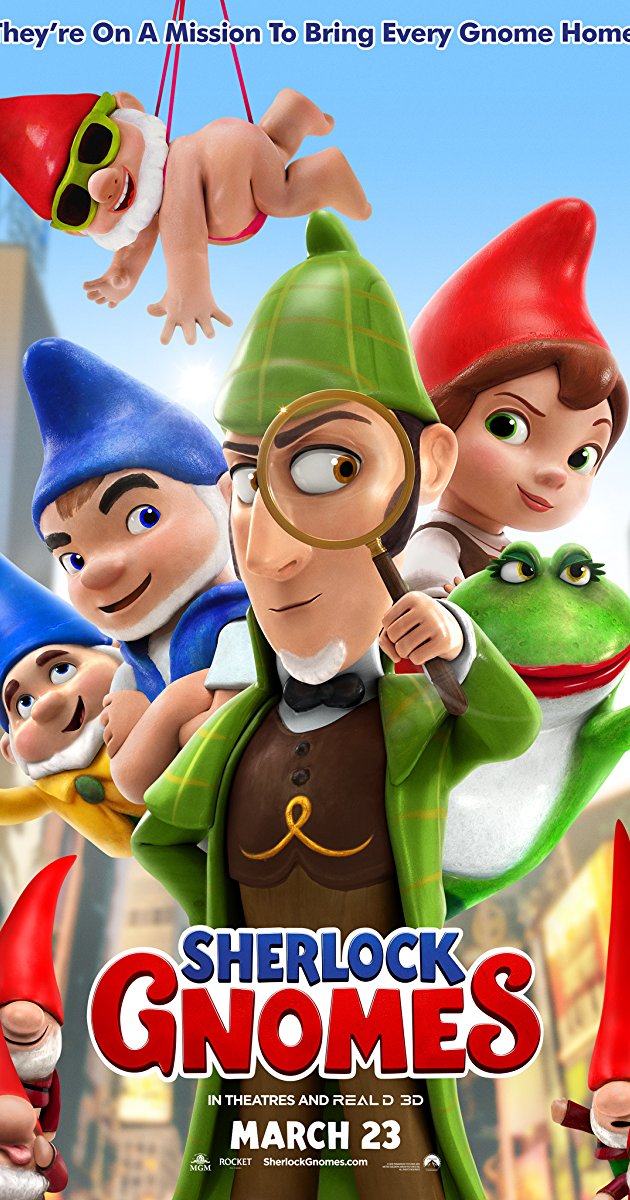 Synopsis from Rotten Tomatoes: When Gnomeo and Juliet first arrive in the city with their friends and family, their biggest concern is getting their new garden ready for spring. However, they soon discover that someone is kidnapping garden gnomes all over London. When Gnomeo and Juliet return home to find that everyone in their garden is missing there’s only one gnome to call SHERLOCK GNOMES. The famous detective and sworn protector of London’s garden gnomes arrives with his sidekick Watson to investigate the case. The mystery will lead our gnomes on a rollicking adventure where they will meet all new ornaments and explore an undiscovered side of the city.

Before I start the review, I want to go through a question I ask myself any time a sequel is made.  That question is, “based on the original film, do we need a sequel made?”  For series like Terminator and The Godfather, there was more than enough of an established world where we can have sequels that show us more if it and have it still be fresh and original.  Sherlock Gnomes however, is not the same case.  A sequel that comes seven years after the original Gnomeo & Juliet, Sherlock Gnomes gives us nothing but uninspired animation, an unoriginal and tired story, and pandering to young children for 86 minutes.

The story follows Gnomeo (McAvoy) and Juliet (Blunt) as their owners move to London where they will start their new lives as head of the garden.  After their friends get kidnapped, they must team up with Sherlock Gnomes (Depp) and Gnome Watson (Ejiofor) to help solve the mystery of these kidnappings across the city and to get their friends back home safely.  Starting off with the animation, for most of the movie the animation is bland and boring with nothing standing out.  What really confused me is that the scenes where Sherlock is thinking of answers are actually really nicely done, but they are only about 30 seconds a piece.  It really bothers me when a film shows the ability to do something well but then they choose to do something in a less creative or efficient way.  John Stevenson has been an animator in the film industry for decades and has worked on some of the better Dreamworks projects in recent years such as Shrek and Kung Fu Panda, so the fact that this film is less artistic than those even though he had more creative control is disappointing.  Moving on to the story, this is a story that has been beaten into the ground and interpreted in as many ways possible. I know this story is supposed to aimed at small children who may not have seen the amount of adaptations of Sherlock Holmes that already exist, but you still have to try something unique.  About a quarter of the way through the film, I predicted almost the entire rest of the movie regarding their investigation and the details along the way.  I should not be able to tell you exactly what happens in your film without ever seeing your film, so that is on the director and writers to do something to throw the viewer of the trail for a little bit.  Finally, I was particularly annoyed by the amount of references to pop culture just for the sake of identifying with the younger generation. For example, one of the pictures of a missing gnome shows the gnome dabbing.  There is absolutely no reason to have this in the movie.  It adds nothing to the plotline and is only there as a cheap laugh. If you really want to identify with younger audiences and make you film memorable, then start by writing a half-decent script and characters that we can actually care about.  On top of this, there are multiple gnomes that are obsessed with their behinds, which I assume is only there to once again pander to little kids.  Whether it is the European gnome in a thong or the gnome that is stuck to his toilet, these gnomes add nothing to the story other than a cheap laugh, which is a good summary of this movie as a whole.

Overall, other than some good voice acting, this film does not add anything original or interesting to the genre of animated films.  Consider the first film was passable at best, there was really no need for a sequel to the original.  I look at this as Paramount’s attempt to compete with studios like Disney in the animated spectrum, but this is not the way to do it.  The reason why people love Disney and Pixar movies so much is that they have beautiful animation, stories that actually matter, and characters that we can easily root for and against. Take away all of these things and you end up with the shallow cash-grab aimed at little kids that is Sherlock Gnomes.