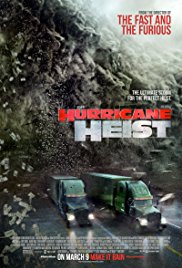 Synopsis from Rotten Tomatoes: Under the threat of a hurricane, opportunistic criminals infiltrate a US Mint facility to steal $600 million for the ultimate heist. When the hurricane blows up into a lethal CATEGORY 5 storm and their well-made plans go awry, they find themselves needing a vault code known only by one Treasury Agent (Maggie Grace), a need that turns murderous. But the Treasury agent has picked up an unlikely ally, a meteorologist (Toby Kebbell) terrified of hurricanes but determined to save his estranged brother kidnapped by the thieves. He uses his knowledge of the storm as a weapon to win in this non-stop action thriller ride charged with adrenaline throughout.

If you want to see a movie that has every type of action cliché and poor dialogue, then The Hurricane Heist may end up as one of your all time favorite movies.  I am seriously amazed that this movie got a theatrical release, because it looks, sounds, and feels like something that the Syfy Channel would show on a Saturday night.  Regardless of all of these problems, the film falls deeply into the, “so bad it’s good,” category.  It might do almost everything wrong, but at least I had a decent time when I saw it.  It is everything a crummy B-list action movie wants to be and relies upon doing everything so poorly that it was laughable.

The story revolves around Will (Kebbell) a meteorologist who returns to his hometown in Alabama to examine a hurricane before it hits the town.  In anticipation of the hurricane, Perkins (Ineson) and his crew plan on robbing the treasury during the hurricane and making out with millions of dollars while nobody notices it.  The plot is so messy and complex that somehow, Will has to rescue his brother, and I swear this his actual name in a hurricane movie, Breeze (Kwanten) from the robbers in the treasury.  Due to a traumatic childhood event, Will’s biggest fear just happens to be hurricanes, even though he is a meteorologist and his job is to track such storms. During the hurricane, Will and Casey (Grace) a treasury employee who escaped from the robbers, must do everything they can to defend the treasury while making sure their loved ones survive the storm.  The plotline and dialogue are absolutely ridiculous in the best ways possible. At times, it almost feels like a horror movie in a sense that in the beginning, every person they reach out to for help is magically in on the heist the whole time.  Realizing they are on their own, Will and Casey have to come up with, “creative,” ways to stop the robbery and save their loved ones.  These actions are so over-the-top and ridiculous that it would clearly kill either of them if they tried these in real life, but they are so funny that I could not help but laugh.  The interactions between the robbers and the protagonists are so over-the-top and crazy that you cannot believe an actual human being would act or speak that way.  Moving on to the dialogue, there were certain storytelling moments that I thought were legitimately funny, but I do not know whether these moments were intentional or not.  For example, Will and Casey mention that they are hungry and out of nowhere, Will pulls out a week’s worth of peanut butter and jelly sandwiches for them to eat and they have a discussion about the types of peanut butter and jelly used on these sandwiches. Another example is when they mention they have to use the bathroom and they decided to pull over and have a deep conversation while both of them are going to the bathroom on the side of the road.  Now, I do not know how peanut butter and jelly sandwiches are essential to the plotline of a heist movie, but it was so bold and stupid that I just had to enjoy it.  The one thing I will give actual credit for is the fact that they did not try to force a romantic subplot on us. I thought for certain that Will and Casey were going to kiss and ride off into the sunset, but that scene never happened, so kudos to them for just sticking towards the ridiculous side of things instead of the predictable one.

Overall, if you went into this expecting the next Citizen Kane and left disappointed, then that is on you.  This film comes from the same director of the original The Fast and the Furious and XXX, so most people knew what this film would be like without seeing.  Do not get me wrong, this film is atrocious, but the fact that it embraces its mediocrity and has a good time with it made it a much more enjoyable experience.  The cast seemed like they were having fun and the plot was made for people to have a good time, and while it was nothing unique or special, it was just bad enough to be remembered.