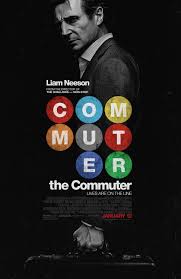 Synopsis from Rotten Tomatoes: In this action-packed thriller, Liam Neeson is Michael, an insurance salesman, whose daily commute home quickly becomes anything but routine. After being confronted by a mysterious stranger (Vera Farmiga), Michael is blackmailed into finding the identity of a passenger on his train before the last stop. As he works against the clock to solve the puzzle, Michael is unwittingly caught up in a criminal conspiracy that carries life and death stakes for himself and his fellow passengers.

The Commuter is the epitome of an average January action film.  I went in with the expectations that the film would be average, yet mildly entertaining, and it was just that.  With decent action sequences and moments of suspense but a story that was severely lacking, The Commuter is the type of film you will see on TNT in a few years.

The most important quality of any action movie is just that; the action.  I did not expect a movie on the caliber of something like John Wick or Atomic Blonde, but none of the action sequences were inherently bad.  Some of the sequences had pretty poor cinematography, specifically with how fast some of the scenes were sped up, but overall some of the fights ended in creative ways, so it was nothing offensive to the senses.  Regarding the rest of the cinematography, while there a few pretty wide shots of the New York City skyline, these are offset by some truly terrible fade-out shots on the train.  I am not sure if those scenes were shot on a green screen or not, but either way those shots are not pretty and are very distracting.

Now, I knew going into this movie that the story was not going to be its strong suit, but the story is borderline nonsensical.  We get absolutely no background as to why the events of the movie happened until the very end.  On top of this, one of the main motivators for Michael (Neeson) to choose his course of action is not addressed at all past a certain point in the movie.  Just because one of his issues is cleared up at the end does not mean the one that caused him to act this way are unresolved.  The antagonists seemed truly unbelievable and many of the twists felt forced and clichéd.  While I was not anticipating this to be one of the best screenplays of all time, a little bit of support in the storytelling would go a long way.

Overall, this film adds nothing nor takes something away from your time.  It is about as average a movie you can make, with nothing super extraordinary about it, yet nothing that would make me want to walk out of a screening.  This is the type of film that is a few decisions away from being either really well made or really poorly received.  Let us hope moving forward that the right decisions are made.