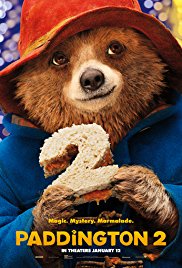 Synopsis from Rotten Tomatoes: PADDINGTON 2 finds Paddington happily settled with the Brown family in Windsor Gardens, where he has become a popular member of the community, spreading joy and marmalade wherever he goes. While searching for the perfect present for his beloved Aunt Lucy’s hundredth birthday, Paddington spots a unique pop-up book in Mr. Gruber’s antique shop, and embarks upon a series of odd jobs to buy it. But when the book is stolen, it’s up to Paddington and the Browns to unmask the thief… Helmed by twice BAFTA nominated director Paul King, PADDINGTON 2 is co-produced by multi award-winning David Heyman / Heyday Films (producer of all eight of the HARRY POTTER films, GRAVITY, THE BOY IN THE STRIPED PYJAMAS, FANTASTIC BEASTS AND WHERE TO FIND THEM) and StudioCanal, who will also distribute in the UK, France, Germany, Australia and New Zealand. PADDINGTON is based on the best-selling and internationally adored series of children’s stories by British author Michael Bond, which have sold more than 35 million copies worldwide, been translated into over 40 languages and captured the imagination of children and adults around the globe.

Every once in a while, a movie comes out that can melt even the coldest of hearts.  Paddington 2, through its charming acting, thoughtful story, and gorgeous animation, is that movie in 2018.

One of the main things that loved about this movie is that almost every detail in the plot leads to something bigger.  There are comments that were made in the film’s exposition that end up coming up in a huge way during the climax.  I love when every moment or sentence matters in a movie and Paddington 2 puts on a clinic of storytelling.  A certain amount of suspension of disbelief is necessary for watching this film, and even though a few of these moments seem truly unbelievable, you do not care because the film is so enjoyable to watch.

Speaking of the film being enjoyable, this film does an amazing job of making us care for the characters.  Never in my life did I think I would care so much about the wellbeing of a marmalade-eating bear, but as the movie progressed, I felt a real emotional attachment towards Paddington (voiced by Ben Whishaw) and wanted him to receive the justice he deserved.  Part of this attachment is due to the type of humor that generates through the film.  While much of it is physical, wordplay, or situational comedy, the chemistry of the cast and the ridiculousness of the movie make it hilarious to people in all age groups.  Regarding the cast, Hawkins shows an incredible range as Mrs. Brown, specifically with her relationship with Paddington and the contrasting relationship she has with her family members.  On the other end of the spectrum, credit is due to Brendan Gleeson and Hugh Grant, who give fantastic performances.  Gleeson ends up as an antihero with a heart of gold, while Grant seems to be having a blast playing the film’s antagonist.  All of these performers come together to make this one of the most enjoyable films I have seen in a long time.

Overall, this may not be the best movie ever made, but it is one that you can enjoy from start to finish.  There is something that everyone can enjoy about this movie and it is one that made this reviewer smiling the whole time.