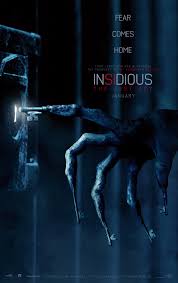 Synopsis from Rotten Tomatoes: Adam Robitel helms the fourth entry of the Insidious series, with Chapter 3 director Leigh Whannell providing the script, centering around parapsychologist Elise Rainier (Lin Shaye) and her continued voyage into the “further”.

Traditionally, horror movies released in January tend to be very poorly made and exist only to compete financially with Awards Season contenders.  From its poorly written dialogue, uninspired story, and lack of actual scares, Insidious: The Last Key continues that trend and adds nothing original to the Insidious universe.

The first thing I want to address is a massive plot hole that aids the heroes on their journey.  One of the main tools used defeat these demons is a whistle from Elise’s (Shaye) childhood.  It is revealed that her younger brother lost the whistle when they were children in 1953.  In 2010, Elise finds the whistle under her brother’s bed and it helps her get out of situations with these demons.  Now, her brother lost that key when she was 7 years old and she ran away from home at age 16.  Are we expected to believe that nobody looked under that bed in 9 years?  I am not the cleanest person in the world, but at least I look under my bed more than once every 9 years.  On top of this, Elise returns to the house in 2010, 50 years later, and the bed is still there.  Now, let’s assume the new owner is the first one to live in the house since Elise’s family moved out.  I understand that some of the furniture is still in the house and that the new owner may not have the financial opportunity to buy a new bed, but are you really comfortable sleeping on a mattress that was around when John Wayne was still alive? I am personally not, and this fails to create a suspension of disbelief for me.

One of the most important elements of a horror movie is the ability to scare the viewer.  Insidious: The Last Key relies almost exclusively on jump scares and rarely builds up tension and suspense.  It has been a while since I have seen a movie that relied so heavily on jump scares, so the first couple caught me a little off guard.  About a third of the way through, a caught onto the pattern and predicted almost every scare before it would happen.  A move like this should never bore a viewer.  Not every moment needs to full of scares and action, but I should not be on the verge of falling asleep at critical moments during the film.

Regarding the dialogue of the film, not only does the film include too many comedic moments, but it relies on them to move the story.  I would be fine with a comedic moment every once in a while if it helps giving us a sense of security before ripping us out of our comfort zone again, but the performances of Tucker and Specs (Sampson and Whannell) were distracting, unfunny, and a Wal-Mart attempt at Rosencrantz and Guildenstern.  The situational humor does not work well in this movie and makes me cringe more than laugh.  Honestly more of my laughter came from how poorly the movie was set up and how unrealistic the stunts looked.

Overall, I did not go into this movie thinking it was going to be the best film of 2018, but it failed to do the basic things required of a horror movie.  This franchise has had 4 movies to put together a cohesive storyline and decent scares and it still cannot get it right.  If we want better movies to be made, we cannot go to see movies like this that are made with no passion, but as of January 7, the film has made $49.3 million on a $10 million budget, so another one is almost guaranteed to be made.  While this might be The Last Key for Insidious, for this reviewer it was the last straw.